The first meeting of the Expert Committee 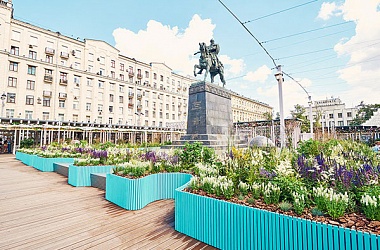 April 24 – 25, Zaryadye Park Moscow, takes place the first meeting of the Expert Committee of the Open International Competition of Urban Landscape Design “Flower Jam”, which will start already for the second time in Moscow later at the end of August 2018.

The Expert Committee is made up of such respected professionals as the famous British landscape designer Matthew Childs, and British urban architect, author of world-famous landscape projects, Peter Fink, and chief curator of the gardens of the Russian Museum, director of the Festival "Imperial Gardens of Russia", Olga Cherdantseva and many others.

The Open International Competition of Urban Landscape Design “Flower Jam”- 2018 will have the following professional nominations.

“Large exhibition garden (100-200 square meters)”. The projects are implemented in public spaces in the center of Moscow; in the streets, squares, pedestrian areas, boulevards and parks. The site for the implementation of each specific project is chosen by the Organizing Committee of the competition.

“Small exhibition garden” (6mx4m)”. The projects of this nomination are small exhibition gardens built into the urban environment. They are implemented in ready-made modules that are quick and easy to install and may include podiums, benches, plant pots, hedges and other elements from the basic set.

Small exhibition gardens will be installed in public spaces of Moscow, both in the center and in the districts.

In 2018 we look forward to active participation in the competition of students from specialized educational institutions – the future professionals in the field of landscape design and architecture. There is a special nomination for them: "Student projects competition" for the public space of fashionable creative clusters. This nomination will attract creative youth to discuss what we want to see in Moscow and to address the issues of urban landscape design.вЃ