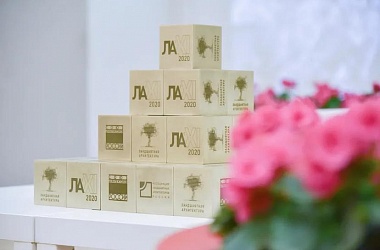 Two projects at once of the Moscow Government's Open International Competition and the Flower Jam Festival became laureates of the XI Russian National Award in Landscape Architecture - the highest professional award in the field of landscape architecture, gardening art, landscape construction, landscaping and gardening in our country.

The Flower Jam series of educational programs won the Best Film, Television and Radio Program nomination. Also, a special project "Flower Jam" for a park in one of the districts of Moscow received a gold diploma.

The educational program "Flower Jam" - a series of discussions and round tables with the participation of leading world experts in the field of landscape architecture, design, online urabnistics - began to be filmed in early summer, under lockdown conditions. Filming is still ongoing: online events are already planned until the end of spring.

More than 20 of the most authoritative speakers from 10 countries of the world - Italy, Great Britain, Poland, Slovakia, Estonia, Finland, Germany, Netherlands, USA, and even Australia - took part in the educational programs of Flower Jam in 2020; as well as more than 25 of the most interesting and respected Russian specialists, including the President of the Association of Landscape Architects of Russia Taisiya Iosifovna Volftrub, head of the Moscow Center for Urban Studies Sergey Kapkov and others.

Within the framework of the program, the most acute, most pressing topics were discussed:

- Creation of compact urban gardens and parks in the conditions of existing buildings is a topic that has arisen especially acutely during the period of forced isolation, which, according to experts, is more easily experienced by people who have at least a small garden or square within walking distance;
- New gardens and parks on the territory of Moscow museums;
- City meadows and the ability to replace their usual lawns;
- Gardens and squares as a tool for improving urban ecology, physical and psychological health of citizens;
- other.

Also, within the framework of the online programs "Flower Jam", for the first time, a broadcast of one of the main European landscape festivals - I MAESTRI DEL PAESAGGIO (Bergamo, Italy) was held in Russian.

In total, more than 16 hours of live broadcasts on social networks and on the “Flower Jam” YouTube channel took place. All programs are recorded in Russian and English and are available for free viewing.

To date, more than 9,000 people have watched round tables and discussions of the Flower Jam educational program, and the number of views continues to grow.

As the Minister of the Moscow Government, Head of the Department of Trade and Services Alexei Nemeryuk noted, “Flower Jam is not only a festival thanks to which the gardens of talented landscape architects adorn public spaces in Moscow. This is also a large educational program with the participation of leading world professionals, the results of which are used both in Russia and abroad. It is also unique in that it is free and available to everyone - a wonderful help in the work of young Moscow specialists in the field of landscape design and architecture."

A special project “Flower Jam” was also awarded a gold diploma - a park, which was designed for one of the residential areas of Moscow by a team of winners of the “Flower Jam” competition in 2018 led by the famous British architect and urbanist Peter Fink - curator and expert of “Flower Jam”.

At the award ceremony, President of the Association of Landscape Architects of Russia Taisiya Volftrub noted that “the project demonstrates a truly high world level of landscape architecture”.