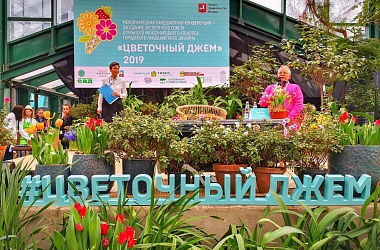 Already on the first day of the conference it became clear that the event had aroused great interest and got a live feedback from the professional community. In order to take part in the event, visitors came from St. Petersburg and Kazan, Nizhny Novgorod and Samara, Obninsk, London, Stockholm, Nice. A stormy discussion was caused by the speech of James Basson, the Chairman of the Expert Council of Flower Jam -2019. And no less excitement was brought by the appearance on stage of the President of the Association of Landscape Architects of Russia, Taisia Iosifovna Volftrub. The authors of the special projects of Flower Jam -2018, who were the winners of the ALAROS Award and who were unable to attend the ceremony earlier in the fall — Peter Fink, Matthew Childs and James Basson — received honorary diplomas from the hands of Taisiya Iosifovna. Special projects of this year’s “Flower Jam” proposed by Peter Korn, Alessandro Trivelli, James Basson and Peter Fink were presented to the public at the conference. Also there was a round table devoted to the aesthetics of “natural” gardens with the participation of Russian and foreign professionals. The first day of the conference ended with a meeting of the Expert Council of the Flower Jam Competition - 2019, where experts selected the finalists of the competition. The names of the finalists of the competition, whose projects will be implemented in the public spaces of Moscow in the summer of 2019, will be announced by experts on the second day of the conference, March 2. The list of finalists will be published on our website and on the “Flower Jam” page in social networks.