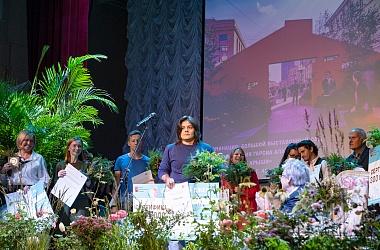 A ceremony of announcing and awarding the winners of the third Open International Competition and Festival of Urban Landscape Design "Flower Jam" was held in the House of Culture of VDNH.

The deputy mayor of Moscow, the head of the Staff of the mayor and the Government of Moscow Natalya Sergunina, noted that this time summer gardens adorned almost 7,000 square meters of public spaces of the city, and one of the most important novelties was the nomination “Landscape project for social areas”. Ms Sergunina said that it makes sense to develop activities in this aspect. For example, educational landscape projects could appear in the territories of Moscow museums, and therapeutic gardens in hospices.

The Grand Prix and Gold medal in the “Large Exhibition Garden” nomination was awarded to Patricia Garcia Alaio for her project “Above the Roof”, which “grew up” in the Arbat street. It is a collective image of an abandoned building, with its front walls so typical of Moscow.
The team of authors of the "Tree Park" company received the Grand prix and Gold diploma in the "Medium exhibition garden" nomination for the "Architecture of Nature" project on Novy Arbat. This is a kind of projection of the future cities, where nature goes hand in hand with industrialization, and natural plants become one with architecture.

The jury awarded the landscape architect Natalia Shushlebina from Moscow the Grand prix and Gold diploma in the “Small Exhibition Garden” nomination. Her project “Neglinka Garden “ near the Sukharevskaya metro station is dedicated to the Neglinka River.

The “Novaya Zemlya” Garden by the “Socotra” team of authors was awarded the grand prix and Gold diploma in the “Landscape project for social areas” nomination. The garden, located on the territory of the Speransky Children's City Hospital, looks like an amazing island with unusual plants.

The “404 You found” project, created by designers from Krasnodar State University: Sergo Popov, Anna Anikina and Oksana Krista, received the Grand Prix and “gold” in the “Student Project Competition” nomination. This garden is an attempt to show how naturally the city and nature can coexist together.

Also at the ceremony there were announced gold, silver and bronze medalists in five competitive nominations.