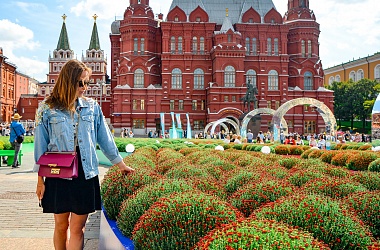 At Manezhnaya Square (as part of the “Flower Jam” festival) a garden in the form of a giant map of the VDNH made of chrysanthemums has blossomed. The project dedicated to the anniversary (which is celebrated this year) of the main exhibition of the country has become the largest show garden in the history of the festival: almost 4.000 bush chrysanthemums are planted on an area of more than 1.000 square meters.

The territory of VDNH is divided into seven thematic zones. They are the Central Alley with the exhibition space “Museum City”, the all-season theme amusement park, the educational cluster “Knowledge Park”, Landscape Park, Craft Park, EXPO zone and “Ostankino” park. The garden in the form of the VDNH map on Manezhnaya square will also be divided into seven thematic zones, each of which will have its own color of structures and plants. The blue and blue chrysanthemums that don’t exist in nature are replaced by pink, purple and white. In the center of the garden are mirrored arches, resembling the inner part of the Main Entrance Arch of the VDNH.

Chrysanthemums as the main plants for the garden were not chosen by chance. For us, these are the most autumnal flowers. As at their home, in China and Japan, they are considered a symbol of the sun and longevity. In the East, they believe that chrysanthemums have magical powers and the ability to prolong life. So the garden of chrysanthemums on Manezhnaya Square is our birthday wish for the exhibition of many years and further prosperity.