The Expert Committee selected the finalists 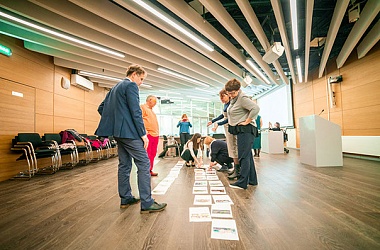 We are pleased to announce the selection of the finalist projects in the professional nominations for the Open International Competition of Urban Landscape Design “Flower Jam”- 2018. The number of works selected for the realization exceeded that originally planned. On the outcome of the Council of Experts we have 39 (instead of thirty-one!) Landscape Garden projects entering the finals, they are: 15 projects in the "Large Exhibition Garden" nomination, 21 "Small Exhibition Garden" projects and 3 student project competition works in the new nomination introduced this year.

According to Peter Fink, the Chairman of the Expert Committee, an increase in the number of Landscape Gardens recommended for implementing is due to the extremely high level of the projects submitted for the competition.

"We have seen really bright, interesting and well-thought-out works, each of which having a real deep meaning," said Peter Fink.

More than two hundred applications from 11 countries were received for taking part in the professional nominations. The experts emphasize: the 39 selected projects are by far not a complete list of Landscape Gardens, which they consider worthy of reaching the final of the competition. In the opinion of the members of the Expert Committee, practically all the works declared in the professional nominations deserve to be seen by Muscovites and guests of the Russian capital.

In this regard, the Expert Committee asked the Organizers of the competition to consider the possibilities to increase the number of finalists and to make a larger number of Landscape Gardens implemented in public spaces of Moscow than it was planned before. Experts are sure: these gardens will be a real decoration of the city and will become centers of attraction for the city residents, as well as for the tourists visiting Moscow.

Here’s the list of the finalists of the Open International Competition of Urban Landscape Design: